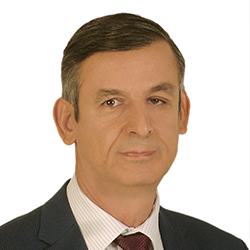 Antonios Trakakis graduated from the Mechanical Engineering Dept of National Technical University of Athens in 1989 and carried out graduate studies at von Karman Institute for Fluid Dynamics in the field of Turbomachinery.

He started his professional career as Cadet Engineer in 1989 and continued in 1993 as 3rd Engineer. He worked as spare parts operator and Assistant Superintendent Engineer in ANEK Lines from 1994 to 1997 when he joined Superfast Ferries. He became Technical and Environmental Manager in 2000. Under the same capacity in 2006 he joined the newly established Soloi and in 2008 Hellenic Seaways. In 2010 he moved to Arista Shipping, an emerging company in the bulk carrier sector. In October 2020 he joined RINA as Technical Director, Marine Greece.

Antonios has extensive experience with the regular and irregular matters involved with the technical operations of a shipping company, as well as with new building projects, sea trials and factory testing of engines. He has studied extensively the challenges and benefits associated with the application of natural gas as fuel and the challenges of decarbonization.